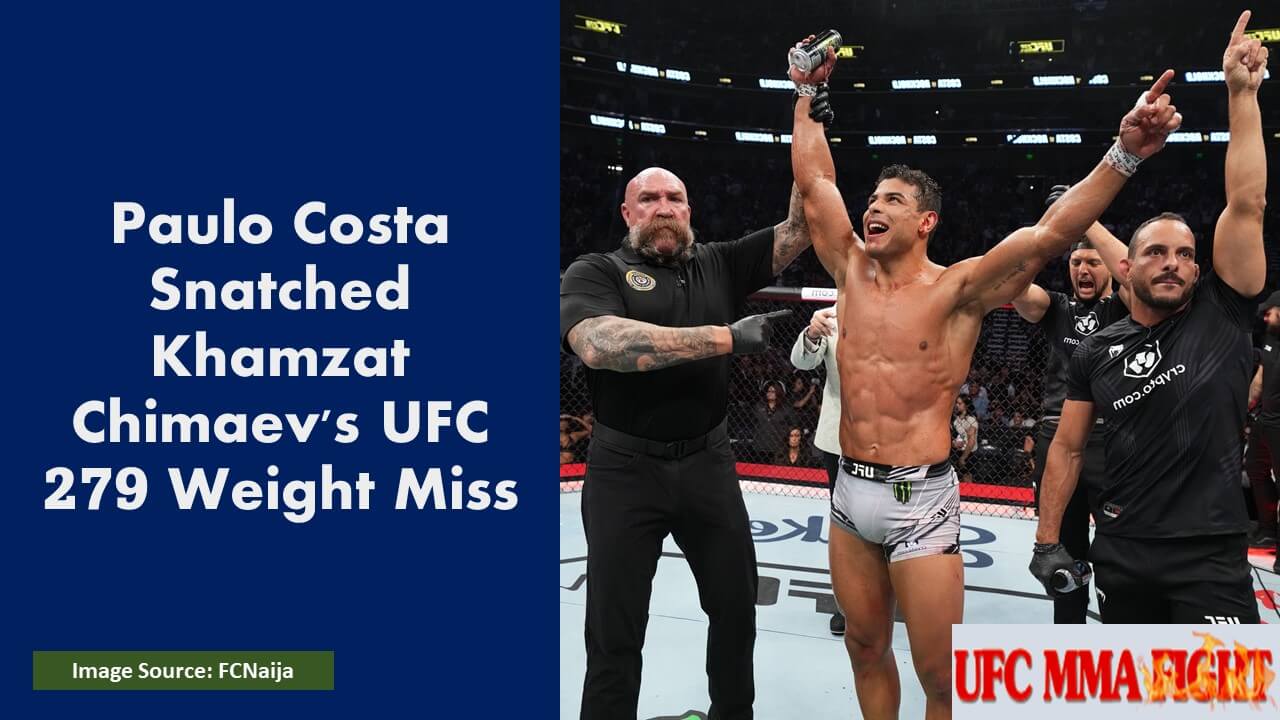 The Brazilian fighter Paulo Costa hopes to finish his current UFC contract with a bout against Khamzat Chimaev. The Brazilian middleweight believes that if he baits Chimaev with enough verbal attacks, he may convince him to make the weight class jump to 185 pounds.

On Monday’s MMA Hour, Costa continued his efforts in this direction, taking credit for Chimaev’s significant weight miss that forced the cancellation of his main event bout with Nate Diaz at UFC 279.

“Chimaev,” Costa said, “because he’s on [a] high.” I took a little bit of his high without asking. I robbed him of his rest, his hat, and his big event bout. I was a thief and took everything.

Costa Challenged His Opponent To Go To The Camera

He yelled at Chiamaev, telling him, “Motherf*****, you need to do something.” “I took all you had, even your money. I took your hat, I slept in your bed, and I weighed you without your permission. You are very troubled and completely insane.

“If I continue, I will die,” she said. Therefore, I believe it is necessary for me to combat that individual.” After it was revealed that Costa earned $65,000 to show and $65,000 to win for his decision victory over Luke Rockhold at UFC 278.

Costa did not rule out the possibility of signing a new deal with the UFC. He has said that he would want an increase in his compensation and that his girlfriend and manager, Tamara Alves, may soon meet with an executive from the UFC to discuss their plans for the future.

When it comes to his weight in the battle with Chimaev, “Borrachinha” is not willing to compromise. On the set of The MMA Hour, he said that despite weighing about 207 pounds, he was thinner than normal and flexed for the audience to illustrate his point.

Chimaev Was Promised A Fight By Costa Prior To UFC 279

When the two fighters and their respective camps bumped into each other at the UFC Performance Institute prior to UFC 278, Costa proposed a bout to Chimaev.

Chimaev declined the offer. Things may have easily descended into violent altercations if not for Chimaev’s colleagues (and the cage that stood between them).

Costa Bragged That They Made Chimaev Lose Weight

Instead, Costa bragged that they sowed a seed that led to Chimaev losing weight as a consequence of their efforts. “It’s undeniable,” Costa said, “that [he missed weight because of me].”

“Because he worked himself up into such a state of anger and tension, and he nearly – he gave up. He gave up. He fell short of the weight by approximately eight, almost nine pounds. “He gave up for sure.” I took everything that belonged to him.

Do something about the hype, the soul, the night of sleep, the big event, or his cap. During the interview that took place on Monday, Costa made a show of defiling a hat that had supposedly belonged to Chimaev and displayed the item.

After Chimaev’s weight, miss, and swift victory over Kevin Holland, UFC President Dana White said that the Chechen fighter’s bulk is a “concern” and that it might force him to move up to the middleweight division. White also claimed that Chimaev had begun fight week lighter than in prior fights.

Chimaev was able to become a great sensation during fight week by playing the character of an antagonist despite the fact that he could not make the weight cut in time for the bout.

This was due to his unrepentant attitude towards the havoc he caused on the scale as well as his lightning-quick surrender of Holland. Both of these factors contributed to his success.

Both of these aspects had a role in bringing about this outcome. The most ideal scenario for Costa would be if part of that place’s luster could transfer over to him.