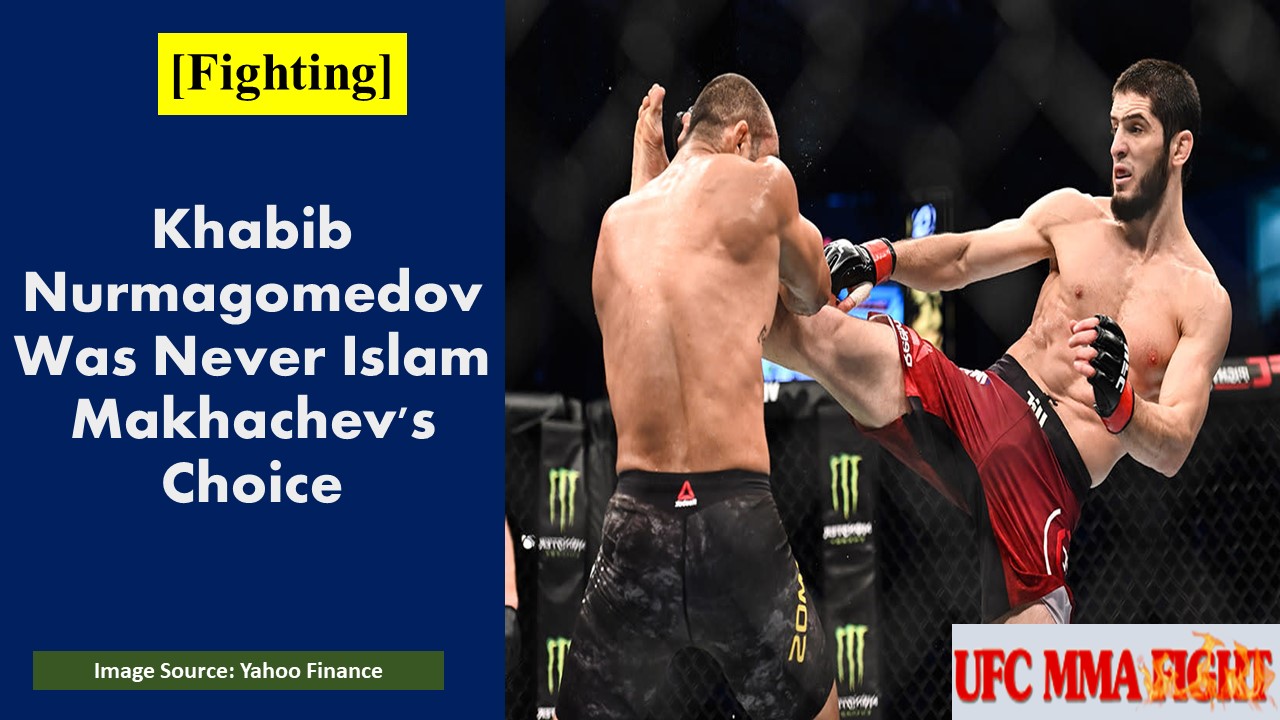 Islam Because of their strong friendship and the similarity in their fighting styles, Makhachev has been labeled “the second coming of Khabib Nurmagomedov,” and with good reason.

In addition to Nurmagomedov functioning as Makhachev’s mentor and coach, the two Dagestani lightweights have both adopted a similar strategy when competing inside the octagon.

He has a physically intimidating style that relies heavily on grappling, which often ends in them mauling opponents when they are on the ground.

In addition to this, Nurmagomedov is regarded as the best lightweight fighter in the annals of UFC history. When Makhachev competes against Charles Oliveira on Saturday night in the main event of UFC 280, he will have the opportunity to begin his own title reign.

Head Coach is Hopeful About Him

Despite these pertinent analogies, head coach Javier Mendez of the American Kickboxing Academy has something interesting to say. He said that Makhachev had never had the feeling that he needed to live up to some type of legacy left behind by Nurmagomedov, much less that he was some kind of clone. He also denied that Makhachev was a clone.

According to what Mendez claimed on an episode of The MMA Hour, Makhachev never mimicked Nurmagomedov from the beginning, nor did he feel pushed to do so. Islam has always been Islam. It never changed. He was certain of the course of action he would take.

Even though he was aware of his destiny and had Khabib as a model to look up to, he did not follow in Khabib’s footsteps. It was the beginning of Islam’s expansion. It was his identity.

Mendez thinks that Makhachev and Nurmagomedov are as close as brothers even though they are not truly connected by blood, but that their personalities could not be more different from one another.

There is no other evidence more compelling than how Makhachev advertises himself, not to mention the activities that he pursues outside of the ring when he is not competing.

Islam is Unique with His Unique Fighting Style

Mendez used the example that Islam did not have any catchphrases to describe itself. He is not known for the memorable phrases that he speaks. Islam does not practice what Khabib does in the world. They could not be more different from one another. Islam is the sort of man who enjoys taking risks. When it comes to activities that are not related to fighting, Cerrone is more of a “cowboy.” He enjoys activities such as horse riding, dirt riding, and other such pursuits.

They are in no way comparable, and Islam has always felt that he was Islam even though he has been entirely at ease in his job. He has also never desired to take on the identity of Khabib.

Also, it is important to bear in mind that he does not have a nickname, and he has never desired to have one. At one point, I attempted to give him a nickname, but Islam told me, “No, coach, my name is Islam,” and I told him that was OK.

It is safe to say that if there is one thing that Makhachev and Nurmagomedov have in common, it is the amount of attention they have garnered while working their way up the lightweight rankings.

Makhachev is now riding a winning run of ten fights, and even before he faces Oliveira on Saturday, he has already been anointed as a future champion. This is something that Mendez recognized in him from the very first day he set foot in his gym in San Jose, California.

He Has Grown up in a Family with Championship Mentality

Mendez said that it was immediately obvious that the championship mentality ran in his family. Absolutely one hundred percent. Almost immediately, he demonstrated it. Even back then, he had an extraordinary amount of talent. It was just a matter of his needing more time and labor, neither of which he had.

Islam is the ideal learning environment. He is diligent in his job, has an unobstructed vision of what he wants, and is aware of how to get it. Does not make a fuss. He is faultless. I have no choice but to describe him in such terms because that is who he is. Very considerate of the feelings and needs of others.

Mendez is not willing to discuss strategy, so we will not ask him about the matchup between Makhachev and Oliveira. However, he is excited about the prospect of facing Makhachev.

According to Mendez, “I feel comfortable about the matchup,” and “honestly,” she said, “I feel good about him with anyone because he’s so well-rounded.” We are free to toy with him in any manner that we see fit.

It does not matter what we ask of him; he will do it, and he will do it well. When it comes time to battle, we will see. One thing to keep in mind is that during one fight in Las Vegas, we had a game plan in place, and right as we were coming out of the gate.

I told Khabib that I think we are stronger on the grappling, so let us just go with father’s plan Abdulmanap Nurmagomedov, and we did just as we were walking out of the gate. The fight ended up going exactly as planned. We altered the original idea, and as a result, everything turned out beautifully.

On Saturday, Mendez expects Makhachev to perform the same way regardless of who the UFC chooses to pit him against Oliveira or any other lightweight in the world.

Mendez said that this battle is not about Charles but more about winning the belt. It is irrelevant if, on October 22, Charles is not positioned across the cage from him in the fight. Someone is going to challenge him, and he has to prevail over that person.