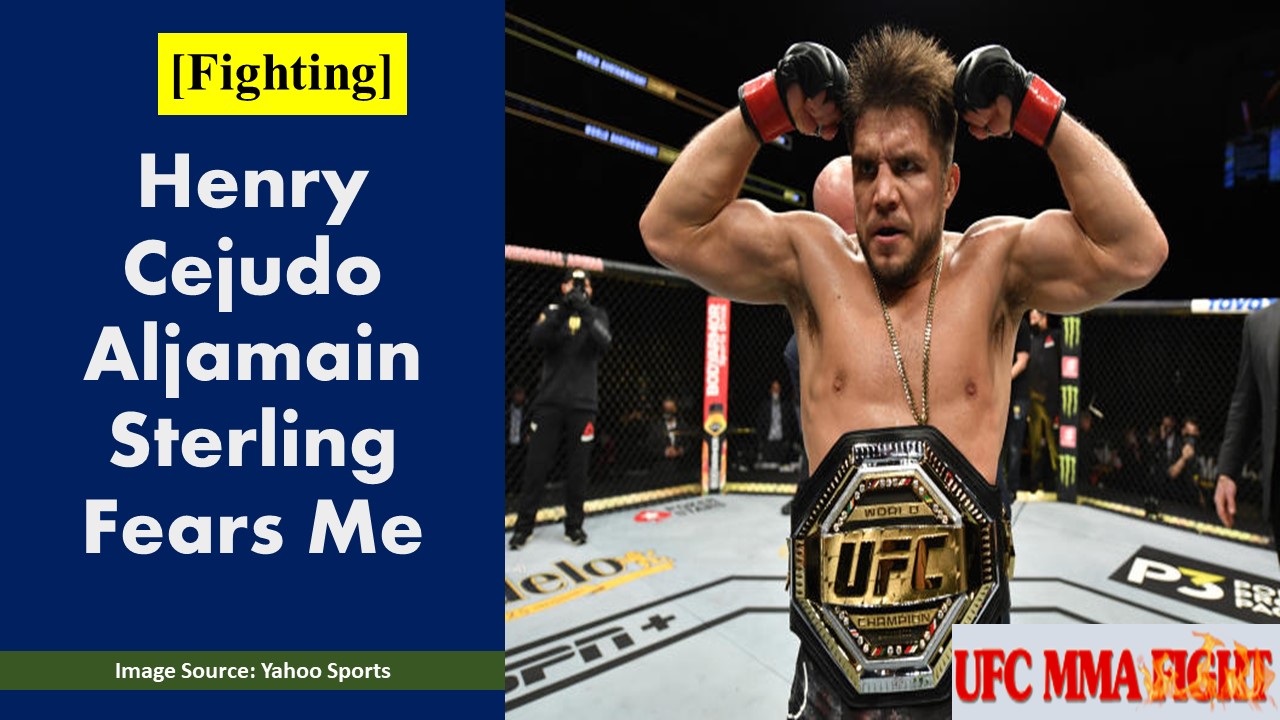 Henry Cejudo said to Aljamain Sterling, “Fear Me.” Henry Cejudo has been clamoring for a championship opportunity ever since he announced his return, and it now seems as if he may get it sooner rather than later.

Although UFC 280 has come and gone, one thing that has not changed is the fact that Aljamain Sterling continues to retain the UFC bantamweight championship. Sterling was able to successfully defend his crown for the second time by claiming victory against T.J. Dillashaw through a second-round technical knockout that was dominated by Sterling’s ground-and-pound attacks.

There was a great deal of conjecture floating about before the actualization of the fight about who would be Sterling’s subsequent opponent.

Henry Cejudo, a former champion who has said that he would be making a comeback to action later this year, was also mentioned as a potential opponent with TJ Dillashaw’s name.

Cejudo has re-entered the USADA testing pool and is good to go for an official comeback; all that is left to do is a book about it. This is even though the aforementioned has not yet taken place.

“Triple C” has made no secret of the fact that he would love to win the featherweight division of the Ultimate Fighting Championship (UFC), but now that the current champion Alexander Volkanovski is rumored to be eyeing a title shot at the lightweight division, Cejudo is shifting his focus back to reclaiming the bantamweight championship.

Cejudo said on his YouTube channel that “It should be me, honestly” about who should be Sterling’s next rival. “I know that I would have lost the opportunity to compete for the championship if Sean [O’Malley] had beaten this guy (Petr Yan) in an honest and open match.”

If Aljamain Wants to Fight Me, Let’s Go!

Let’s get this fight on the road, guy if Aljamain is serious about wanting to battle it out with me. I get the impression that he is terrified of me. I guess that he would rather avoid competition with someone like myself.

Also, at this past weekend’s UFC 280 event, the “Sugar Show” delivered, putting to rest the concerns of many skeptics who questioned whether or not he deserved the nod over the former champion Yan that he received through the split decision.

Before the fight, UFC President Dana White said that the winner would probably be the next in line for the title held by Aldo Sterling. As a result of O’Malley’s victory, he jumps immediately to the top of the list of contenders for the title.

However, immediately after the incident, White addressed the media and suggested Cejudo’s name as another possibility in addition to his own. Therefore, adding even more mystery to a weight class that was already packed to the brim with competitors.

According to Cejudo, “Dana White believes that this man (O’Malley) won, and he’s going to earn the next championship chance.” “So, with that out of the way, let me just say that I’m sitting here licking my fingers because I see a lot of prospects for myself.”

I now have the title of best in the world, and I fully want to maintain that title moving forward. That is my opinion on the matter.

Cejudo is one of the most accomplished wrestlers mixed martial arts (MMA) has ever seen, so he doesn’t see any need to be concerned about Sterling, who is also an exceptionally good grappler.

Sterling did what he does best against Dillashaw, which is to impose his will on the former two-time champion and dominate him on the ground in all areas. He achieved this by taking the fight to Dillashaw.

Unfortunately for Sterling, some members of the community are taking credit away from him since Dillashaw knowingly went into the fight with a serious shoulder injury.

Cejudo said that there wasn’t much of a battle at all. “T.J.’s shoulder continued going out, and Aljamain got the job done, but despite all of that, I’m still not pleased with this man. Hate me if you must; I don’t care what you think of me.

“Yeah, he defeated T.J., but T.J. was actually walking into the octagon hurt, pulling his shoulder out, and yet this guy wasn’t able to finish him, or I guess the greatest part for me was that Aljamain wasn’t able to discern that this person had a shoulder injury.

You have to be able to see and look at things like that if you want to be a warrior, a murderer, or a shark. He didn’t even see it. He is figuratively worn down by it. It took him that long to beat up a guy who was limping about with a dislocated shoulder.

He completed the task at hand, forced the referee to end the fight, and won through technical knockout, but was T.J. in good health? To suggest such a thing is not in keeping with reality.